As you can see from the ‘World Markets at a Glance’ table, the result of the unauthorised Catalonian referendum was more of a local issue, as it had little impact on equity markets outside of Spain. And even in Spain, it was far from a blind panic, as the Spanish Ibex index fell just 1.89%. However, this could easily be a slow-burning, unpredictable issue: both Banco Sabadell and CaixaBank indicated that they may move their headquarters out of the region, highlighting the corrosive impact of independence (if Catalonia does split from Spain, it is also likely to exit the euro and the European Union); likewise, if Spanish/European politicians do start a thaw in the impasse and open dialogue with Catalonian authorities, Spanish equities could easily bounce back. 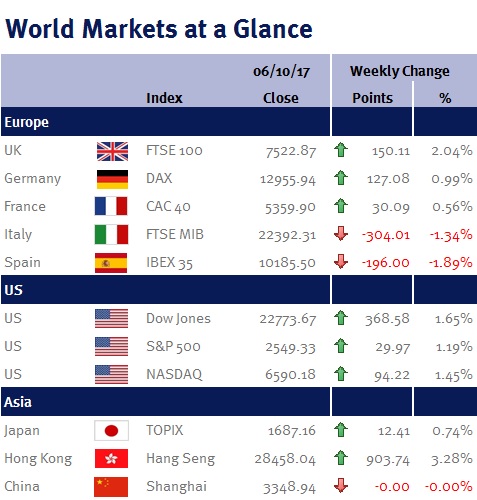 Elsewhere in Europe, minutes from the ECB’s last monetary policy meeting held on 6-7 September 2017 showed that policymakers discussed their QE program, which currently buys €60bn of bonds a month and is due to end in December 2017. There was “a broad agreement” that substantial support was still needed to ensure inflation returns to their 2% target, suggesting their QE program could potentially be extended well into 2018 or beyond (Mario Draghi, the President of the ECB, has previously said that inflation was unlikely to converge to their target until 2019/2020).

UK equities were helped by the decline in the pound, which fell back amid speculation about a challenge to Theresa May’s leadership. The pound ended the week down 2.54% at 1.3055 against the US dollar.

Friday’s (6 October 2017) US employment data was more of a crazy weather report than a gauge of underlying economic trends, as it showed the impact of the recent Hurricanes. Non-farm payrolls indicated that the US economy lost 33,000 jobs – the first monthly decrease since September 2010. However, according to the Labor Department, Restaurants and Bars (where employees only get paid if they turn up), saw a 105,000 drop in payrolls – clearly showing the distortion caused by the weather. Despite this decrease, the unemployment rate fell to 4.2% (the lowest since February 2001)!

Nevertheless, the really big surprise was the pace of wage growth, which increased to 0.5% on the month, taking the annual increase to 2.9% – suggesting that wage inflation may finally be coming through and making a December US interest rate more likely.

Next week we have the minutes from the last Fed monetary policy meeting and US CPI and retail sales for September.