UK politics is never dull, and the past week has been no exception. The week began with Boris Johnson making mischief ahead of Theresa May’s major speech in Florence this afternoon (Friday 22 September 2017). While her speech was billed as a bid to reboot Brexit talks with the EU, in the end it fell short of expectations. Although it had a much softer tone than her Lancaster House speech in January, it lacked any detail and as a consequence, the pound snapped its recent rally which boosted the FTSE-100. 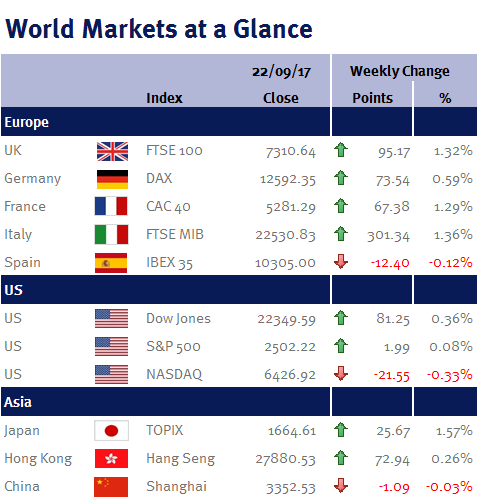 Speaking at the IMF in Washington on Monday (18 September 2017), the Bank of England (BoE) Governor Mark Carney was up to his usual flip-flopping tricks. Last week he surprised everyone by paving the way for tighter monetary conditions starting with a potential November interest rate increase (please see here), but then on Monday he said any coming interest rate rises would be limited and gradual as he warned that there are “considerable risks to the UK outlook, which include the response of households, businesses, and financial markets to developments related to the process of EU withdrawal”.

However, it was the Fed’s monetary policy meeting that was the main focal point of the week.

And it appears to be the beginning of the end of an era as the Fed finally announced its long awaited plans to reduce its $4.5tr balance sheet (i.e. reversing QE, in a process being coined as ‘Quantitative Tightening’ or QT).

While the Fed’s ‘dot plot’ continues to suggest interest rates will be 1% higher by the end of next year, I am expecting a less aggressive increase as I believe the Fed’s balance sheet reduction plans will act as a substitute for short-term interest rate increases (as it also effectively tightens monetary conditions). Moreover, Janet Yellen showed little concern over any long-term implications of this year’s hurricanes and while she expressed her bewilderment over subdued inflation, she repeated that it was due to transitory factors!

Germany goes to the polls this weekend (Sunday 24 September 2017) in an election that will determine whether Angela Merkel wins a fourth term as German Chancellor (polls suggest she has a commanding lead over her main challenger and current coalition partner, Martin Schulz’s Social Democrats, although the far-right AfD are also polling well). As she is unlikely to secure an outright majority, the excitement will be over which party (or parties) will join her Christian Democrats in a coalition government.

Next week, eurozone and US inflation readings will be the main focus.