As Hurricane Irma avoided the worst predictions of destruction, US equities gained with both the Dow Jones and S&P 500 closing at record highs. The FTSE-100 went in the opposite direction thanks to a strengthening pound (please see below) – as around two-thirds of the FTSE-100’s total revenue is derived from abroad, a stronger pound provides both a headwind to exporters and those companies with significant overseas earnings.

US CPI rose to 1.9% (from 1.7%), while core CPI was unchanged at 1.7% – both slightly ahead of forecasts. Although this may give the Fed little reason to pause its planned interest rate increase, it should be noted that Hurricane Harvey impacted these figures as gasoline and housing accounted for nearly all of the increase – in fact if you exclude housing (shelter) core CPI is up just 0.5% over the past year. Hurricane Harvey also depressed US retail sales – with overall sales falling 0.2% after a 0.3% gain in July. 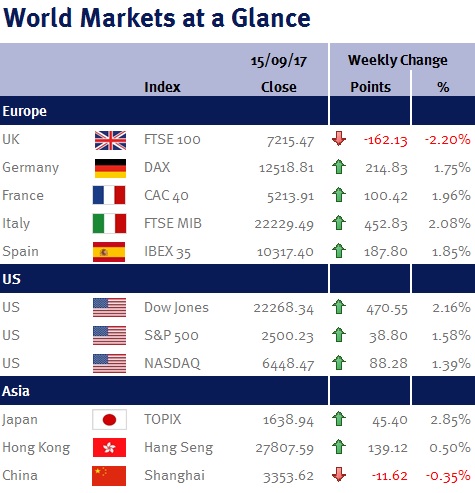 UK CPI inflation was expected to move upwards to 2.8% in August, reflecting higher fuel costs. However, inflation actually accelerated to 2.9% thanks mainly to higher clothes prices – clothing and footwear prices jumped 2.4% on the month, making them 4.6% more expensive than this time last year (many retailers have been helped by the weather this year and as a consequence haven’t had to be as aggressive with their summer sales).

Additionally, the increase from 2.6% in July does come in the wake of a recent (well, until this week – please see below commentary) decline in the value of the pound, which suggests that some of this increase is due to an exchange rate pass-through (a weaker pound increases the cost of imported goods), rather than domestically generated inflation.

Nevertheless, the higher inflation reading coupled with a lower unemployment rate (unemployment fell 75,000 to 1.46m taking the unemployment rate down to 4.3%) embolden a reasonable amount of hawkish rhetoric at this week’s Bank of England (BoE) monetary policy meeting despite the fact that the pickup in prices is squeezing household purchasing power and acting as a drag on the economy (data on Wednesday 13 September 2017 showed that wage growth continues to be outpaced by inflation, rising by just 2.1%). However, while the BoE talked hawkish, they acted dovish and left interest rates unchanged at 0.25%.

For regular readers, you may remember that on 23 June 2017 (please see here), I reported that the BoE’s Chief Economist Andy Haldane stated that he considered voting for an interest rate increase in June – and despite this week’s higher inflation reading he interestingly didn’t vote for an increase! In fact, the BoE policymakers voted 7-2 to keep interest rates unchanged.

Whilst I appreciate that the BoE is becoming increasingly uncomfortable with inflation above their 2% target and that the chances of a 0.25% interest rate increase have risen (markets are now pricing in a one-in-three chance of a 0.25% rise before the end of this year), I continue to believe that as inflation is likely to peak out soon I am sceptical that the BoE will aggressively tighten monetary policy, especially given all the Brexit uncertainty. Consequently, a reversal of last year’s emergency cut last August following the EU Referendum is probably as much as the BoE will increase interest rates in the foreseeable future.

The currency markets showed their fickleness this week as the pound yo-yoed. The UK inflation reading coupled with news that MPs had voted to allow the EU (Withdrawal) Bill to progress through Parliament, strengthen the pound from US$1.3188 to $1.3329. This move was completely reversed following the slow wage growth data, only to bounce back to $1.3617 (its highest level since the Brexit vote) following the BoE’s monetary policy meeting. Against the euro, the pound is now €1.1361, having been as low as €1.0758 at the end of August.

This week coming we have UK retail sales and eurozone CPI. However, it is the Fed’s monetary policy meeting on 19-20 September 2017 and subsequent press conference, coupled with Theresa May’s revised Brexit approach speech on Friday (22 September 2017) that will dominate this week’s newsflow and dictate market movements.