Equity markets ended the week a touch lower despite anxiety at the start of the week over North Korea’s hydrogen bomb test. Equity markets were helped by the announcement that US President Donald Trump had successfully kicked the can down the road for three months, after he reached a deal with the Democrats to extend the US debt limit to mid-December (his Republican party wanted a longer-term agreement).

Markets were also helped by comments from a number of Fed policymakers that suggested the US central bank may not increase interest rates again this year – and that’s even before the potential fallout from Hurricanes’ Harvey and Irma (which will have an impact on most economic indicators and data over the coming months and quarters). The Fed’s Minneapolis President, Neel Kashkari, said that it was possible that the recent interest rate increases may now be harming the US economy, while Robert Kaplan, the Dallas Fed President, said that he thinks the Fed should be patient on further interest rate increases. 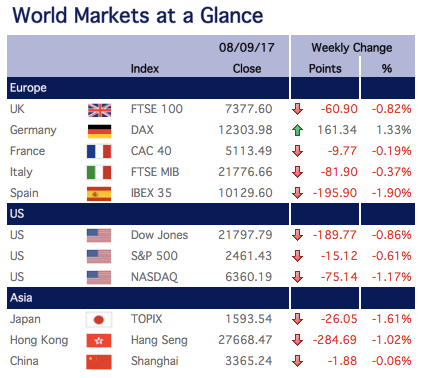 Additionally, the Fed’s latest Beige Book report showed that while the US economy expanded at a “modest to moderate pace” in July and August there was little sign of an acceleration in inflation.

As expected yesterday (Thursday 6 September 2017) the ECB left interest rates unchanged. However, it was the subsequent press conference by Mario Draghi that was the main focus as we looked for clues regarding the future of its QE programme beyond 2017. And unfortunately, we were left disappointed as he simply said that the “bulk of decisions will be taken in October” (the next ECB monetary policy meeting is on Thursday 26 October 2017).

With inflation running persistently below the ECB’s 2% target, coupled with the recent strength in the euro (which effectively tightens monetary conditions), I believe that the ECB’s asset purchase program is likely to be extended into next year and it is unlikely that the ECB will raise interest rates this year or next.

The highlights for this coming week include UK CPI (which is likely to tick-up slightly), employment data (including wage growth) and a BoE monetary policy meeting (the BoE will almost certainly leave interest rates unchanged despite the expected higher CPI reading as H2 2017 GDP growth is currently looking soft due to the squeeze on household spending). In the US, we have CPI and retail sales data.