On Tuesday (29 August 2017) we had the typical knee-jerk panic reaction that you would expect after North Korea fired a missile over Japan (equity markets were rattled, while safe haven assets gained).

However, these moves were very quickly reversed after positive economic data boosted confidence that the non-inflationary global growth is ticking along nicely (the goldilocks scenario). 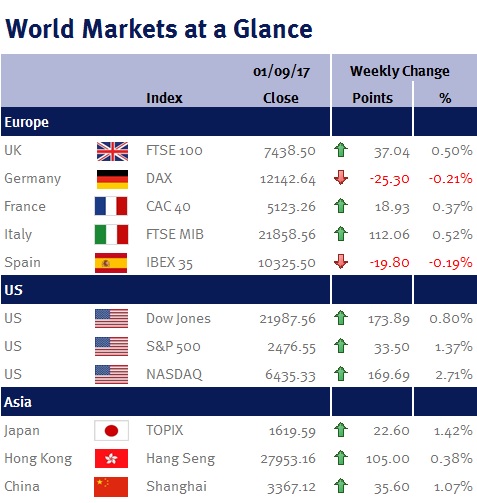 In the US, annualised Q2 GDP growth figures were revised up from 2.7% to 3% – the fastest pace in two years helped by stronger household spending and a bigger gain in business investment; while the core PCE, the Fed’s preferred inflation gauge, remained well below their 2% target at 1.4% in July on an annualised basis.

Additionally, while US non-farm payroll data was robust, the 156,000 increase was slightly below estimates. This coupled with the above PCE inflation and a small increase in the unemployment rate to 4.4% (from 4.3%), supports my view that the Fed will have difficulty justifying another interest rate increase this year – and that’s even before the potential fallout from Hurricane Harvey (which will have an impact on most economic indicators and data over the coming months and quarters).

In Europe, on Wednesday (30 August 2017) the economic confidence gauge was published showing an increase from 111.3 in July to 111.9 in August – the highest level since the financial crisis. Then on Thursday (31 August 2017), preliminary CPI data showed that while inflation ticked up to 1.5% in August from 1.3% in July, this was influenced by energy costs as core inflation held steady at just 1.2%.

As a result, I continue to believe that it is unlikely that the ECB will feel comfortable tapering its QE program just yet, especially given the recent strength of the euro (which is likely to further lower inflation expectations). And we could find out next week what policymakers are thinking as we have a press conference following the ECB’s monetary policy meeting (Thursday 7 September 2017).

Also next week we have eurozone PMI and the US Beige Book.