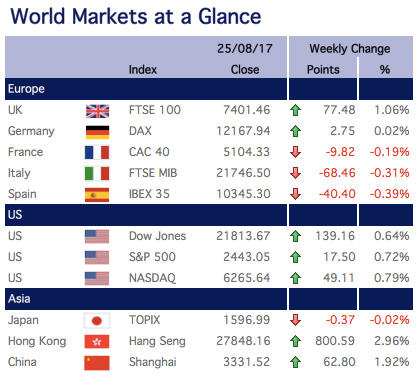 Markets moved higher over the week, ahead of speeches by Janet Yellen (Governor of the Federal Reserve) and Mario Draghi (President of the European Central Bank) at Jackson Hole – although, most equity markets had closed by the time they both spoke.

Investors hoping for new insight to the state of the US and European economies or updates on monetary policy were disappointed. Yellen instead talked about regulation adopted since the financial crisis and whilst Draghi did reiterate that when the ECB withdraws its monetary stimulus, it will do so slowly, he did little to talk down the strong euro after ECB officials expressed concerns about the strength of the regions currency in the minutes of its most recent meeting.

The euro reached an eight year high versus the pound this week and data from the UK showed consumer spending was at its weakest since 2014 in the second quarter of 2017. The fall in value of the pound increases the cost of imported goods and consumers are finding it impacts their spending power; this sentiment was reinforced by data this week from the Confederation of British Industry showing retail sales fell the most this month in more than a year.

The focus next week will be on US inflation and jobs data, with ADPs on Wednesday, US PCE (the Feds preferred measure of inflation) on Thursday and non-farm payrolls on Friday. Also of note will be will be PMI data from the UK, US and China.