Global equities ended the week higher amid an easing of tensions between the US and North Korea. 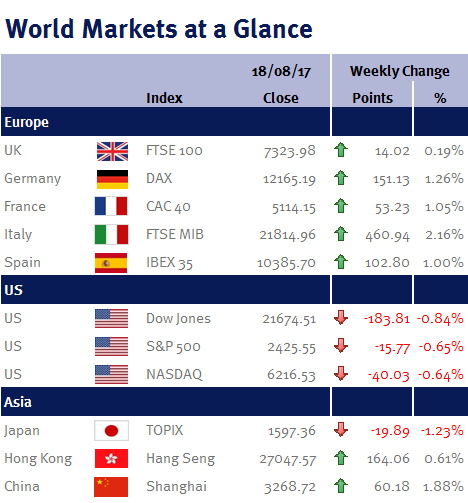 European (ECB) and US (Fed) central banks published minutes from their July policy meetings this week and both suggested their policies may remain accommodative.

Minutes show some US Fed members are questioning whether they need to continue raising interest rates (having already done so twice this year), as US inflation continues to lag the Fed’s 2% target (and has done so now for over 5 years). However, some policymakers believe that a delay could lead to an inflation overshoot. Policymakers were also split on the timing of its planned balance sheet reduction (reversing quantitative easing) with some members prepared to begin immediately whilst most wanted to defer the decision until the September meeting.

An improving economic backdrop in Europe has led to a strengthening currency and the ECB’s minutes showed policy makers were concerned the euro could strengthen further when it decides to scale back its quantitative easing programme. A strong currency could potentially hinder the region’s recovery as it makes imports cheaper and exports less attractive, making it difficult for the ECB to meet its inflation target of just below 2%.

UK retail sales rose more than forecast in July; however this was largely driven by food purchases at supermarkets, as most other sectors saw declines. UK inflation was very slightly lower than market consensus but still resulted in a slide in the value in the pound, as the miss was attributed to lower fuel costs. Finally in the UK, second quarter unemployment came in at 4.4%, the lowest level since 1975.

Following the recent focus on geopolitical events, this coming week’s attention will shift back to the world’s major central banks, as both Janet Yellen (Governor of the Federal Reserve) and Mario Draghi (President of the ECB) will be speaking at the annual Jackson Hole meeting.