This week’s headlines have been dominated by the United States and indeed the rest of the world’s frictions with North Korea. North Korea’s continual threats against the US saw Donald Trump make an off the hip comment earlier in the week promising “fire and fury”, a statement that even took the US secretary of State, Rex Tillerson, by surprise as Trump’s diplomatic inexperience once again was on display! Soon after Trump’s comments, Pyongyang (North Korean capital) issued a statement saying it was examining a plan to strike areas around the US territory of Guam. It is this political rhetoric, in a typically quiet period for stock markets that has caused this week’s volatility. However, one must not forget that despite the ‘noise’ from the US and North Korea, neither party wants nor would benefit from any military action… neither would South Korea or China who both have a vested interest in keeping peace in the region. A Chinese state-run newspaper went on to suggest that China would remain neutral in a conflict if Pyongyang was the antagonist, leaving the North Koreans with no meaningful allies. This being the case, the political toing and froing has injected short term volatility into the market; compressing values of otherwise strong corporates, introducing some strong buying opportunities and if nothing else, it appears to be unifying the US government! 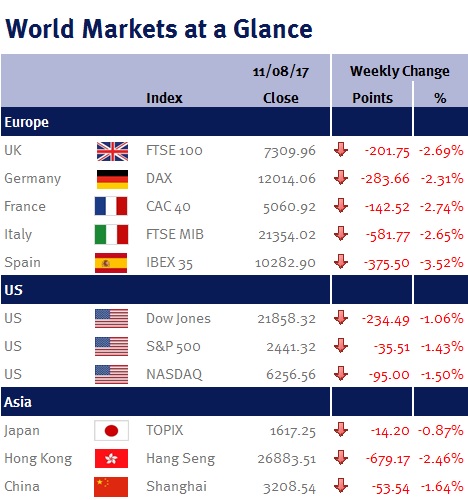 Wednesday saw Brexit continue to offer up some marginal progress. In a letter from David Davis (Secretary of State for exiting the EU), he wrote that negotiations surrounding Brexit are difficult but productive. Davis then went on to cast assertions that the EU was failing to match Britain’s offer regarding the rights of citizens. Whilst there has arguably been progress, this displays the strength of the hand that the Europeans have in negotiations, providing a strong base for valuations in the European markets ahead of the German elections in September.

In the corporate space, and for anyone interested in ‘on demand’ content, Disney announced its plans to end its agreement with Netflix in 2019 with the intention of going it alone in the space. This put some pressure on the price of Netflix stock, seeing many investors using this as a buying opportunity. As, to put things into perspective, in terms of viewing hours, Disney content on Netflix represented approximately 5% of consumer viewing time over the past year, a relatively small amount. In addition, Disney is one of the largest content providers globally and as such we are less likely to see a raft of content providers launching their own service… that being said, a more competitive space would be great for the consumer! This came in the wake of Q3 earnings for Disney which came in strong, heavily buoyed by its theme parks.

There has been little by way of data releases this week. Thursday saw UK Industrial Production considerably beat expectation for June coming in at 0.5% on the month and 0.3% year on year, 0.4% higher than anticipated in both cases. This was largely driven by a rise in mining and quarrying, as a result of higher levels of gas and oil production. In addition to this, the US inflation data for July was released on Friday coming in slightly below expectation, pushing out the Federal Reserve’s inflation goal and further instilling a view of ‘lower interest rates for longer’ – music to the ears of the Asian and Emerging Markets!