Markets broadly ended the week higher in the wake of a relatively muted week for global politics. After the sacking of James Comey earlier in the year following a probe into Donald Trump’s alleged collusion with Russia to influence last year’s US presidential elections, Christopher Wray was sworn in on Wednesday (2nd August) as the new Director of the FBI. This appointment added an air of stability in an otherwise uncertain US political backdrop, with Wray formally serving as a Federal Prosecutor and head of the Department of Justice’s Criminal Division. 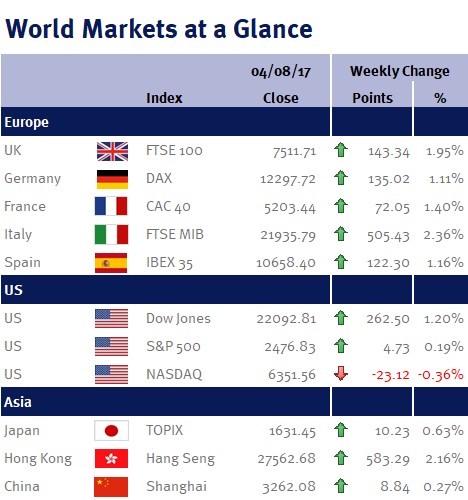 A number of key data sets were released in Europe earlier in the week, further suggesting the region’s economy is continuing to go from strength to strength. Core inflation data (CPI) came in above expectation at 1.2%, whilst the headline unemployment rate decreased from 9.3% to 9.1% again beating expectation. All of this data sat amid the backdrop of GDP (Gross Domestic Product) growth of 0.6% for the second quarter of 2017 and 2.1% year on year, with the latter coming in much stronger than previous. This data suggests that the European markets are shrugging off any Brexit worries, backing the European Central Banks message of stability and recovery.

On Thursday the Bank of England (BoE) held interest rates at 0.25% with the Monetary Policy Committee seemingly dovish seeing a vote of 6-2 to keep rates unchanged. It is appearing likely that we are going to see rates remain ‘lower for longer’, as in a press conference following the rate announcement the Governor of the BoE, Mark Carney, lowered growth expectations. Carney announced growth levels of 1.7% for 2017 and 1.6% for 2018, down from 1.9% and 1.7% respectively, citing concerns over inflation outpacing wage growth and uncertainty surrounding Brexit as the key protagonists.

At the corporate level the global technology sector has been influential in steering markets over the past few weeks with many of the big names reporting. This week was the turn of Apple seeing their third-quarter revenues rising 7.2% to $45.4 billion compared with the average projection of $44.9 billion. They signalled that their product demand is strong, with iPhone demand in particular remaining resilient, resulting in them increasing their revenue forecast. This aids in buoying confidence in the sector following a selloff and also drove the S&P500 to its highest level, and saw the Dow Jones break through 22,000 on Wednesday (2nd August) for the first time in history.

With the US in mind, one of the key data sets last week was that of US employment, used by the Federal Reserve (Fed) as a gauge of both policy effectiveness and indeed policy change. July headline unemployment dropped to 4.3%, but despite this the wider market is considering a September rate hike unlikely. With employment data continuing to be strong, and wage growth still lagging long term requirements it introduces a new dynamic for the Fed to address. As strong employment data should increase wages which should put pressure on inflation, yet this relationship appears to be detached at present leaving the Fed looking for ways of re-establishing it.