As expected US interest rates were left unchanged. However, there were a couple of subtle nuances in the language of the accompanying statement, which I believe are noteworthy as it made the tone slightly dovish. 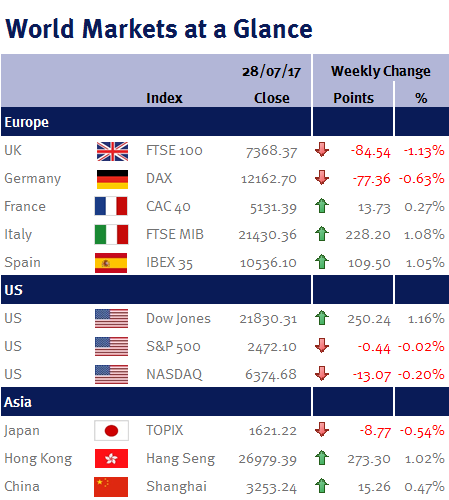 The first was that inflation has ‘declined and is running below 2%’, dropping the word ‘somewhat’ from their previous statement suggests that the Fed policymakers may be finally waking up to the current declining trajectory of inflation (which they have previously stated was “transitory” and not significant), especially as the Fed’s statement also stated that they monitor inflation expectations as well as actual inflation.

The other was on the timing of their planned balance sheet reduction (reversing QE – which I believe is a potential substitute for short-term interest rate increases). This was changed to ‘relatively soon’ from ‘soon’. Whilst this may still seem very ambiguous, it suggests to me that the Fed is considering starting in September (which if correct would significantly reduce the odds of another US interest rate increase this year).

The UK’s 2Q GDP came in as forecast at 0.3% on Wednesday (26 July 2017). However, the Office for National Statistics said the UK economy experienced a “notable slowdown in the first half of this year” – and it is this lacklustre growth that reinforces my expectations of lower-for-longer interest rates in the UK. While today’s (Friday 28 July) US 2Q GDP came in just below expectations at an annualised rate of 2.6% (up from Q1’s 1.2% pace), business investment was up by the most in almost two years – signalling that the eight-year economic expansion can be sustained.

For this coming week, the Fed’s preferred measure of inflation (the PCE) and non-farm payroll data will be of interest after this week’s slightly dovish statement from the Fed.

In the UK, 3 August 2017 is ‘Super Thursday’! This is one of the Bank of England’s (BoE) four big policy days in the year when we get: the BoE’s interest-rate decision (while I expect interest rates will be unchanged, the level of dissent will be the main focus); the quarterly growth and inflation report is published; and Mark Carney, the BoE Governor, holds a press conference.