While politics may have dominated the news headlines this week, it was the outlook for monetary policy which drove equity markets higher.

Tuesday’s (18 July 2017) UK CPI data showed that inflation fell for the first time since last October, from 2.9% in May to 2.6% in June. Although this is still above the Bank of England’s (BoE) 2% target, it does help to remove some of the pressure ahead of the next BoE monetary policy meeting on 2-3 August 2017 (at the last meeting three members voted for an interest rate increase). 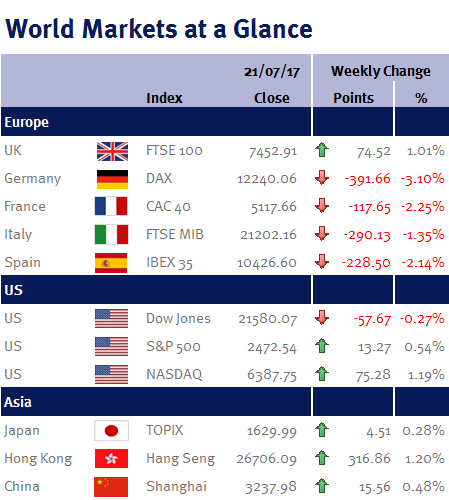 Furthermore, it won’t be too long before the effect of sterling’s weakness following last year’s Brexit vote starts to fall out of the year-on-year inflation data. Consequently, I continue to believe that an interest rate increase this year is very unlikely.

In Europe, the ECB left interest rates unchanged and kept its QE €60bn per month. In the accompanying press conference, Mario Draghi the ECB President admitted that the current eurozone economic expansion “has yet to translate into stronger inflation dynamics” – which confirms to me that monetary tightening is not currently needed.

Elsewhere, the Bank of Japan again lowered its inflation forecast for this year and pushed back its timeline for reaching its 2% inflation target to the fiscal year 2019/20 – which suggests that it is likely to keep its monetary stimulus in place.

This week coming we have both UK and US 2Q GDP data. However, it is the Fed monetary policy meeting on 25-26 July 2017 that will dominate this week’s newsflow and dictate market movements. While I expect that the Fed will leave US interest rates unchanged, I am hoping that they will provide more information on their balance sheet reduction plans – such as an indicative start date. Additionally we have results from three of the four tech giants known as the FANGs (Facebook; Amazon; and Alphabet – the parent of Google).