What a difference a week makes. For the last two weeks central banks had been upsetting markets with their hawkish tone – but that all changed this week, sending equity markets higher.

In the UK, Ben Broadbent, the Bank of England’s (BoE) Deputy Governor, provided us with some crucial insight into how the central bank may vote in August, by saying that he is not ready to vote for higher UK interest rates. As I have said ad nauseam, although UK inflation is running ahead of the BoE’s target at 2.9%, this is predominately due to the pound’s sharp fall since the EU Referendum result last June (which makes imports more expensive) and as a result, I believe that an increase in UK interest rates would be a policy error as it would simply exacerbate the current consumer retrenchment (M&S this week reported weaker-than-expected Q1 sales). 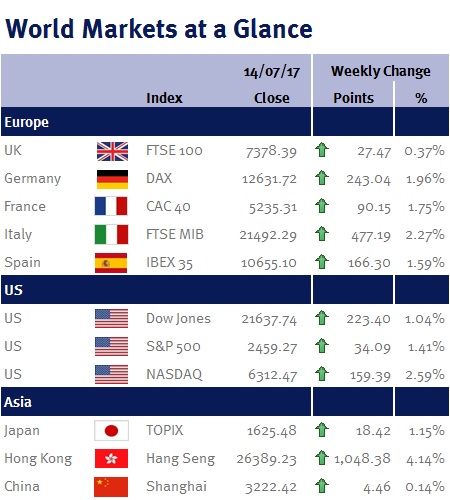 In the US, the Fed Chair Janet Yellen, gave a two day congressional testimony this week. Although she played a pretty straight bat by sticking to the Fed’s outlook for gradually rising inflation and interest rates over the next few years, her testimony had a dovish tone as she signalled that the Fed doesn’t need to rush to tighten monetary policy as inflation is below their 2% target.

In addition to Janet Yellen, her colleagues Lael Brainard and Robert Kaplan also opined this week. Both indicated that they would prefer to see inflation moving toward the central bank’s target before removing accommodation.

And today’s (Friday 14 July 2017) US CPI inflation showed that prices continued to slow! June CPI was up only 1.6% year-over-year, down from 1.9% in May (the Fed has previously stated that the slowing US inflation was transitory – today’s reading implies that it isn’t).

Furthermore, US retail sales also fell for a second month in a row in June, suggesting Q2 US GDP may disappoint as the consumer accounts for around two-thirds of the US economy.