The major highlight this week was the release of minutes from the last Fed monetary policy meeting held on 13-14 June 2017.

Overall, there was little in the minutes that would suggest the Fed is considering changing course on US interest rates. Consequently, it looks like there will be one more increase this year (and given recent inflation softness, a December increase is probably more likely than September). 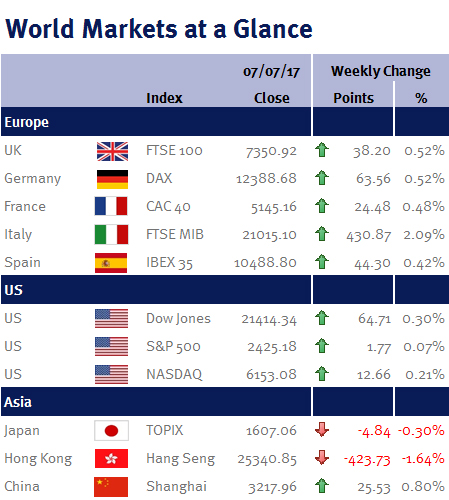 On the Fed’s balance sheet reduction plans, we already knew that the Fed planned to runoff maturities at $6bn per month (which will increase by $6bn every 3 months, until it reaches $30bn per month) – so we were just looking for clues on the start date. And it appears that policymakers are torn when it comes to the start date, falling into one of two camps: either just-get-on-with-it (maybe as early as September 2017), or announce a future commencement date (sometime in 2019). Given the recent softness in both inflation and economic data, I would speculate that the policymakers are waiting to see what Q2 GDP growth is likely to be and confirmation that the recent inflation softness is temporary (as they have previously suggested).

Minutes from the ECB’s last monetary policy meeting were also released this week and indicated that policymakers discussed dropping references to increasing QE (they have already dropped their promise to cut interest rates as economic growth has improved). Whilst they decided against it, the fact they are discussing it suggests that it is probably only a matter of time before they do.

Elsewhere US non-farm payrolls beat expectations of 178,000, rising 222,000. Perversely, the unemployment rate rose to 4.4% from 4.3%. This suggests that more Americans are re-entering the jobs market to look for jobs – especially as wage gains again disappointed, rising just 0.2% (versus expectations of a gain of 0.3%).

As for the week ahead, we will be ignoring all the political/media noise (the Repeal Bill will be presented to parliament on Monday 10 July 2017) and instead focus on what is important to the financial markets: US CPI; and UK employment data. In addition, we are expecting trading statements from a couple of UK retailers and housebuilders which should provide some insight into how the UK consumer is faring (as the consumer accounts for around 60% of the UK economy).