Central bankers gave us another roller-coaster ride this week as they flip-flopped between dovish and hawkish proclamations.

Janet Yellen’s presentation on Tuesday (27 June 2017) at the British Academy was well timed following last week’s obvious divide (please see my commentary from last week by clicking here) between those policymakers that are pushing for more interest rate increases and those wanting to wait for more evidence that the recent weakness in inflation is only temporary. She made it apparent that the US economy was strong enough to withstand higher interest rates and as such the outlook for US monetary policy tightening hasn’t shifted (i.e. there will be another interest rate increase this year followed by three rate increases in both 2018 and 2019). 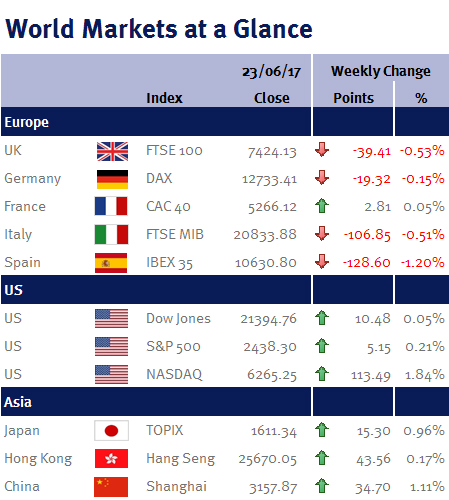 On the same day at the biannual Financial Stability Report, Mark Carney said that the Bank of England (BoE) plans to increase capital requirements for UK banks in order to address the risk of potential bad loans following the recent growth in consumer credit and to protect them from economic risks related to Brexit. This effectively aims to keep the lid on consumer credit growth – which grew by 10.3% in the year to April 2017 – and was therefore interpreted as putting a stop to a hawkish conversion of BoE policymakers and reinforced his Mansion House speech (given last week) that there was no rush to increase UK interest rates.

Then the following day (Wednesday 28 June 2017) at the ECB’s annual forum in Portugal, Mark Carney turned hawkish by warning that it may be necessary to remove the BoE’s monetary stimulus if the current growth/inflation trade-off lessens, as the BoE’s tolerance for faster inflation is limited. Although that is a big ‘if’, especially as UK consumer confidence has weakened (and the consumer accounts for around 60% of the UK economy), the stage is now set for a gripping BoE meeting on 3 August 2017.

However, it was Mario Draghi’s speech at the ECB’s annual forum that got the most attention as it also had a hawkish tilt (he is normally very dovish). While he reiterated that Europe’s economy was improving, he said that the current factors weighing on inflation were only temporary (the lower oil price). This potentially opens the way for a paring of the ECB’s current stimulus – although ECB officials later said that Mario Draghi’s comments had been misinterpreted!

While these statements suggest that the major central bankers are trying to out-hawk each other, one should remember that wage growth is anaemic and global inflation pressures, remain subdued, not to mention below central bank targets – data released today (Friday 30 June 2017) showed that eurozone CPI slowed to 1.3% from 1.4%, while US PCE (the Fed’s favoured inflation measure) eased to 1.4% for May from 1.7% in April. Consequently, I currently remain unconvinced that the BoE or the ECB will tighten monetary policy any time soon, while in the US, the Fed’s current indicated upward path looks aggressive and is therefore far from certain (especially given that the Fed also plans to reduce their balance sheet – i.e. reversing QE).

This week coming we have minutes from the last Fed and ECB monetary policy meetings (which hopefully will give me a better insight into their current thoughts given this week’s mixed signals). The important data releases this week include Friday’s (7 July 2017) US employment data (non-farm payrolls; unemployment rate; the participation rate; and average earnings). Additionally, Angela Merkel, the German Chancellor, hosts a two-day G20 summit in Hamburg (7-8 July 2017) – although no doubt all attention will be on Donald Trump who is expected to have his first meeting with Vladimir Putin.