With this week now mercifully coming to an end there is cause for optimism as none of the three main potential market-moving events negatively impacted markets.

In addition to the UK general election (please see my market update titled ‘None of the Above’ by clicking here) we also had the ECB’s monetary policy meeting and James Comey’s (the former FBI Director who was dismissed by Donald Trump last month) Senate testimony. 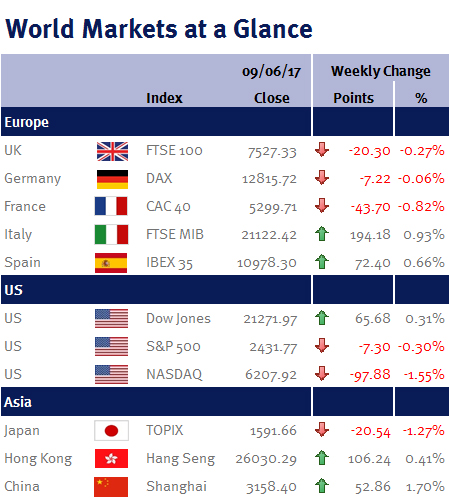 As expected the ECB didn’t make any policy changes, but did adjust guidance by removing the part of its statement that stated eurozone interest rates could be cut again and said that the risks to economic growth were broadly balanced. This is the first baby step toward ‘normalising’ its monetary policy.

Although the ECB raised its expectations for economic growth, it also lowered the outlook for inflation to 1.5% in 2017, 1.3% in 2018 and 1.6% in 2019 (which is consistently below its 2% target). Consequently, I believe that that ‘normalisation’ could be a long way off as stimulus is likely to continue for some time. Furthermore, in the press conference following the meeting, the ECB President, Mario Draghi, was relatively dovish stating that the ECB needs to be “patient”, which suggests to me that the ECB is wary of repeating its 2008 policy error when they tightened monetary policy prematurely.

In the end, James Comey’s testimony before the Senate Intelligence Committee didn’t have any impact on financial markets with both the Dow Jones and S&P 500 again making record-highs this week. While James Comey repeatedly stated that Donald Trump was never personally under investigation (bolstering Donald Trump’s assertion that he’d been cleared by the FBI), it has heightened the impression in the market that Donald Trump may be prone to rash and unexpected decisions (and that is particularly worrying given the current heightened geopolitical tensions and the recent threats to North Korea).

This weekend we have the first round of the French Parliamentary elections, with Emmanuel Macron’s centrist La Republique En Marche projected to do well. The second round is next Sunday (18 June 2017).

It’s a big week ahead for US economic data. We have May’s CPI; the Empire Manufacturing Survey for June; and the latest initial jobless claims number. However, most attention will be on the Fed’s monetary policy meeting which concludes on Wednesday 14 June 2017. Policymakers are expected to increase interest rates by 0.25%, the second increase this year. Hopefully policymakers will also provide more details on their plans to unwind the Fed’s $4.5tr balance sheet.

We also have monetary policy meetings in the UK and Japan (I expect both central banks will leave interest rates unchanged), as well as UK CPI, RPI and PPI and eurozone CPI.