This week all eyes were on the US Fed monetary policy minutes (from their meeting on 2-3 May 2017) for clues regarding their strategy for reducing the Fed balance sheet and OPEC, as the oil cartel members gathered in Vienna to discuss output. 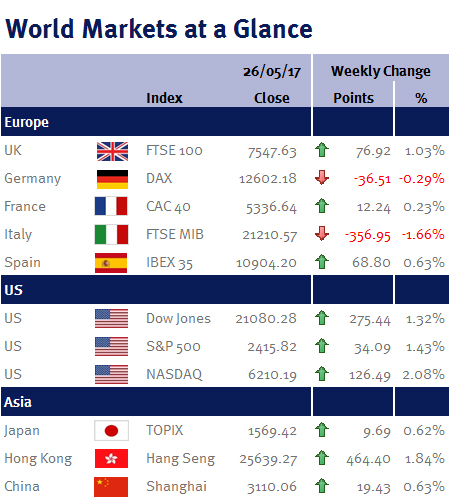 Fed minutes showed that policymakers were not worried by the recent Q1 GDP slowdown (believing it to be temporary) and that monetary tightening was warranted. This corroborates recent policymaker comments and bolsters my view that the Fed is determined to increase interest rates at their 13-14 June 2017 meeting.

However, the market was hungry for more details on how policymakers plan to shrink the central bank’s $4.5tr bond holdings (purchased by the Fed’s QE program during the global economic crisis) – and the market was not disappointed. According to the minutes, policymakers favour a glacial, slow and steady shrinking rather than a fire-sale dumping, by having a gradually increasing cap on the amount of securities that it will run off each month. Consequently, US equities moved higher, with both the S&P 500 and NASDAQ Composite making fresh record highs, while the Dow Jones ended the week just 35.27 points shy of its all-time high of 21,115.55.

OPEC and its 11 non-member allies (which includes Russia, Kazakhstan, Mexico and Malaysia) confirmed a widely expected nine-month extension of its supply deal agreed last September. Given there were no additional cuts, the market’s reaction wasn’t surprising (Brent oil ended the week $1.61 lower at $51.75 a barrel), especially as US shale output has already negated a significant amount of last September’s agreed cuts (I have long argued that shale has replaced OPEC as the price setter as unlike conventional oil exploration, shale production can respond quickly to demand and price changes).

Elsewhere, the Office for National Statistics said that the UK economy slowed more sharply in the first quarter of 2017 than initially estimated. The UK economy expanded by just 0.2% in Q1 2017, down from the preliminary estimate of 0.3% published last month. This compares to growth of 0.7% in the last quarter of 2016 and confirms that the UK consumer (which accounts for around 60% of the economy) is starting to be squeezed by accelerating inflation and slowing wage growth.

In contrast, the second reading of Q1 US GDP was much brighter. The reading was revised upwards to an annualised rate of 1.2% from the dismal 0.7% growth published last month, thanks to revisions in construction and consumer spending – and helps to cement expectations for a June 2017 interest rate increase (please see above).

Despite a shortened week there is plenty of economic data to digest. The main focus will be data out of the US: on Tuesday (30 May 2017) we have the Fed’s preferred inflation gauge, the PCE and two days later (Thursday 1 June 2017) we have PMI data. At the end of the week (Friday 2 June 2017) we have the last major economic indicator ahead of the Fed’s monetary policy meeting on 13-14 June: employment data (nonfarm payrolls, average earnings, unemployment rate and participate rate). Additionally, we have a number of Fed policymakers speaking (including Lael Brainard, Robert Kaplan, John Williams and Jerome Powell).

Elsewhere, Mario Draghi (the ECB President) is speaking at the European Parliament’s Economy Committee in Brussels (we will be listening for clues on the future of the ECB’s QE programme) and we have Eurozone unemployment and UK PMI.