The markets ended the week with a backdrop that echoed an air of stability off the back of some positive political events and economic data sets.

The French election result that saw Francois Macron’s pro Europe Centrist Party defeat the far right party of Marine Le Pen was not only beneficial for the stability of the French economy, but was also a further defeat of an extremist populist party within Europe. This victory is further evidence that the broader populations of European countries continue to support the EU and Eurozone. The victory has also partially reintroduced investor faith back into polling data, with the polls accurately depicting the primary and secondary rounds. This faith could prove to be a key factor for the rest of 2017, aiding in reducing market volatility with both the UK and German elections still to come. 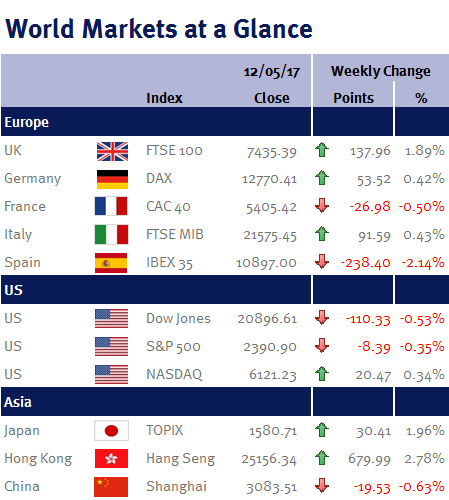 The French election result was followed by the election of a new president in South Korea. Moon Jae-in was elected on Tuesday and was seen as a massive buoy for global politics. The polls accurately depicted a heavy victory for Moon, seeing him take over 41% of the votes. This victory introduces some stability within the region after seeing the impeachment of previous leader, Park Geun-hye, who was ousted following a corruption scandal for which she now awaits trial. With tensions between the US, China, and indeed North Korea building over recent months, Moon’s softer stance towards North Korea (favouring negotiations over military action) will aid in softening frictions internationally, whilst alleviating skirmishes on the North/South border.

In the UK the Bank of England’s Monetary Policy Committee left its current policy stance unchanged last Thursday, with interest rates remaining at 0.25%. The committee also voted to maintain the current level of government bond purchase at £435 billion. Despite central bank policy, uncertainty continues to persist, with the governor of the Bank of England Mark Carney, on Thursday, warning of stagnating wages and slower economic growth levels ahead. This comes amidst a backdrop of political campaign trails, ahead of the snap general election, and the continuing uncertainty surrounding Brexit.

Friday saw the release of US inflation data with the broadest inflation gauge CPI (consumer price index) measuring 0.2% for April 2017, and 2.2% year on year. This came in slightly lower than expectations following a slowdown in energy, transport and healthcare, but is still seemingly higher than the US Federal Reserve Bank’s 2% inflation target, seeing the broader US market stabilise after the euphoria following the election of Donald Trump.