As expected the Fed left US interest rates unchanged. However, the accompanying statement was more hawkish than expected.

While acknowledging that US economic data had slowed during Q1, the policymakers stated that they view the recent slowdown as “transitory” and not significant. Consequently, it would appear that they haven’t changed their view that the US economy can handle a gradual increase in interest rates.

Therefore, a June interest rate increase is still a possibility. 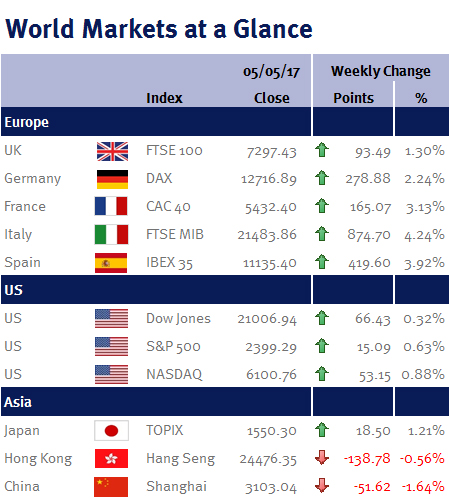 According to the ‘Fed-dot plot’ there will be three rate hikes per year in 2017, 2018, and 2019, which would take US interest rates up from a range of 0.75% – 1.00% to 2.75%-3.00% by the end of 2019. However, given they also plan to reduce the Fed’s balance sheet (reversing QE), I am very sceptical and would expect significantly fewer increases – in fact, it wouldn’t surprise me if US interest rates are still less than 2% at the end of 2019, especially as inflation remains soft (their preferred inflation measure, the PCE is running below at 1.8% while core CPI recently slowed to 2%).

Annoyingly, there was no word from the Fed on balance sheet reduction, even though it is highly likely this would have been a big focus during their monetary policy meeting, following last month’s minutes which highlighted outline plans. Consequently, we will have to wait for the meeting’s minutes for further details (due to be announced on Wednesday 24 May 2017).

The week’s other big story was oil: Brent oil traded below $49 for the first time since last November on realisation that OPEC’s production cuts weren’t reducing global stockpiles, as US shale production has filled the gap (I have long argued that shale was a game changer and has replaced OPEC as the price setter). And as an aside, while I am over-simplifying it, global inflation will not sustainably rise while core inputs (such as oil) are falling – again suggesting that the Fed’s dot-plot (see above) could be unrealistic.

This weekend coming (Sunday 7 May 2017), France will choose its new President. Opinion polls (which were very accurate for the first round) currently point towards the centrist Emmanuel Macron beating far-right Marine Le Pen by a very wide margin – and as polls close at 7pm UK time, we should have a good idea of the result well before bedtime. However, as financial markets are already convinced of (and priced in) an Emmanuel Macron victory, don’t expect a repeat of the relief rally seen following the first round election on Monday 24 April 2017.

We also have the Chinese FX reserves (Sunday 7 May 2017) and trade balance (Monday 8 May 2017) and on Wednesday (10 May 2017) Mario Draghi, the President of the ECB, will explain his monetary policies to the Dutch parliament.

Then on Thursday (11 May 2017) the Bank of England will issue its monetary policy decision and meeting minutes, alongside its quarterly inflation report and press conference given by the Governor of the Bank of England, Mark Carney.

The following day (Friday 12 May 2017) we have US CPI, retail sales and the University of Michigan consumer sentiment index.