It has been an exceptionally busy week.

Following Sunday’s first round of the French Presidential election (please see my market update titled: Le Relief Rally, please click here to read), global equities rallied strongly on speculation that centrist Emmanuel Macron will easily defeat far-right nationalist Marine Le Pen in the runoff on Sunday 7 May 2017 (polls currently suggest that Emmanuel Macron will win between 59% and 62% of the votes). 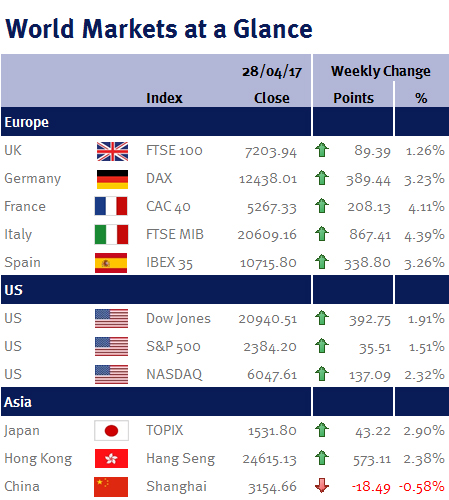 With the first round of the French Presidential elections successfully navigated the market was then able to focus on the slew of other important events this week: not only did we have the busiest week of the US Q1 earnings season (with 194 of the S&P 500 companies reporting), we also had monetary policy announcements in Europe and Japan, Q1 GDP data for the US and UK and Donald Trump outlined his tax plan. All this was topped off with a possible US government shutdown tonight (Friday 28 April 2017).

Stocks including Caterpillar (the construction and mining equipment manufacturer), McDonald’s (fast food chain), Amazon (e-commerce) and Alphabet (the parent of Google) jumped (ending the week up 8.4%, 4.9%, 2.9% and 7.6% respectively) after announcing better-than expected earnings results, highlighting that the US (and global) economy continues to improve.

While Donald Trump’s proposal to overhaul the US tax code was light on specifics (legislative details are due to follow in June 2017), his plan included cutting the corporate tax rate and targeting overseas profits. Although Donald Trump maybe being ambitious by pushing for a 15% corporate tax rate (it is currently 35%), it has been estimated that just a 10% cut to 25% would boost annual after-tax earnings by 11%, while his initiatives to repatriate overseas earnings, is likely to boost share buy-backs. Both of which, in my opinion, could be very positive for US equity prices.

Elsewhere, the Bank of Japan lowered its inflation forecast (from 1.5% to 1.4% for this fiscal year), suggesting that it is unlikely to tapper, let alone exit, its monetary stimulus any time soon, while Mario Draghi, who has started to come under pressure to map-out a path towards exiting the ECB’s stimulus, did not update forecasts or make any significant policy announcements. However, he stated that while economic growth risks are still tilted to the downside they are easing, while underlying inflationary pressures continued to be subdued. On the same day (Thursday 27 April 2017), the European Commission’s economic confidence index showed the highest reading in a decade (since August 2007 to be precise) at 109.6 – so it may only be a matter of time before we see a policy shift from the ECB.

UK GDP growth slowed to 0.3% reflecting a slower consumer (I have previously highlighted disappointing retail sales – consumer spending accounts for around 60% of the UK economy), while the US economy grew at an annualised rate of 0.7% during the first quarter.

And tonight’s (Friday 28 April) US government shutdown was averted after lawmakers agreed on a stopgap bill in order to give themselves time to hammer out a broader deal.

Unsurprisingly, most global equity markets have ended the week firmly higher, with the US NASDAQ Composite Index breaking into record territory and the Dow Jones and S&P 500 ending the week within 1% of their all-time highs.

Looking at this coming week, we have the alphabet of economic data: US PCE (the Fed’s favoured inflation reading) and ISM data; PMI data for the UK, Eurozone, China and Japan; and eurozone PPI and GDP. We also have eurozone unemployment data, US non-farm payrolls and a US Fed monetary policy meeting.