With the exception of the UK, most global equity markets ended the week higher.

The UK equity market was impacted by the strength in the pound following Theresa May’s decision to call an early election. The pound jumped from $1.23 to $1.29 (sterling strength hurts exporters and multinationals companies as over two-thirds of the FTSE-100’s total revenue is derived from abroad). If Theresa May can capitalise on her 20 point lead in the opinion polls, she should be able to extend the Tories current tiny 17 seat majority, which should strengthen her Brexit negotiations (as she won’t have to play fiddle to the big-named Eurosceptics in the party) and potentially result in a softer exit. 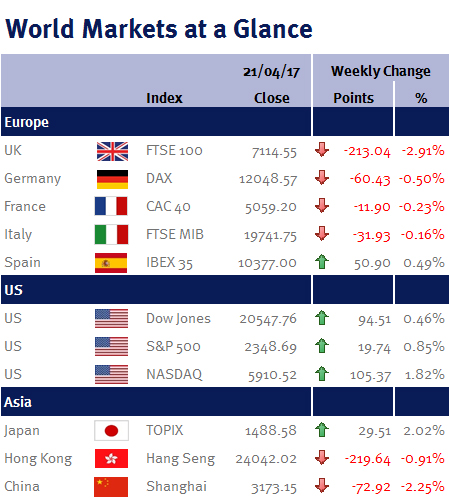 The move appears well timed given how well the UK economy has so far held up since the EU Referendum vote on 23 June 2016, especially as this week’s UK retail sales showed sales fell 1.5% in March (the largest decline in seven years and 1% lower than expected). The fact sales fell across the board, suggests that UK consumer sentiment may finally be wearing.

Elsewhere, US equities were helped by better than expected corporate results coupled with comments from Steven Mnuchin, the US Treasury Secretary, who said that a US government shutdown should be avoided (the deadline is Saturday 29 April 2017) and that Donald Trump’s plans to reform taxes was progressing and should be done by the end of the year.

Also in the US, the Federal Reserve’s Beige Book described the US economy as growing modest to moderate and the labour market as tight, adding companies are finding it increasingly difficult to attract and retain workers. These comments were supported by data out this week showing the number of people continuing to receive unemployment benefit fell to a 17-year low and suggests that a US interest rate increase in June can’t be ruled out.

The Turkish President, Recep Tayyip Erdoğan, narrowly won his referendum, handing him executive powers. The new structure strengthens his position and is likely to heighten political tension with Europe.

China’s economy grew by 6.9% in first quarter of 2017. Industrial production (which accounts for more than 40% of Chinese GDP) expanded by 7.6%.

This weekend coming, I won’t be watching the FA cup semi-final. Instead I will be waiting and watching for preliminary results for the first round of the French Elections. Polls currently point towards Emmanuel Macron and Marine Le Pen making it to the second round runoff on Sunday 7 May 2017, but a late surge in the popularity Jean-Luc Mélenchon is casting doubt on the outcome. Marine Le Pen and Jean-Luc Mélenchon have both expressed a desire to take France out of the single currency and so should they be successful, the market could be down significantly on Monday morning (24 April 2017).

Also next week, the European and Japanese central banks announce their monetary policy and the US and UK announce first quarter GDP.