Tensions with North Korea were running high and aggravated by the US decision to deploy an aircraft carrier and accompanying warships to waters off the coast of the North Korean Peninsula.

Following recent events in Syria, US Secretary of State Rex Tillerson visited Moscow on Wednesday (12 April 2017) and whilst unable to agree on the facts surrounding the chemical attack, the two nations did agree to establish a working group to address smaller issues and make progress towards stabilizing the relationship. 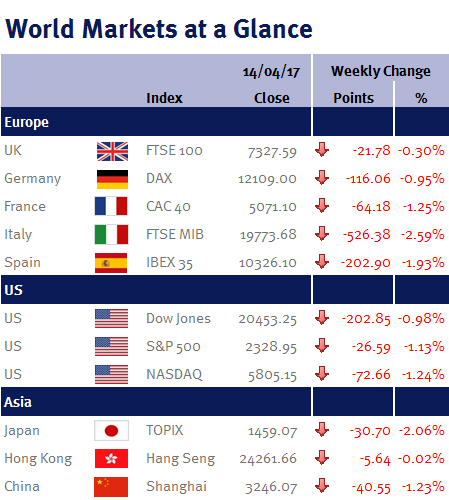 UK inflation remained at 2.3% in March as the timing of Easter led to cheaper airfares which offset increases in food and clothing prices. Despite being unchanged since February 2017, inflation is still running at the highest level in over three years and up from just 0.5% in March 2016. With wage growth remaining weak and inflation forecast to accelerate further, UK consumers are coming under increasing pressure. Data released by the British Retail Consortium on Tuesday (11 April 2017) showed non-food retail sales fell by 0.8% compared to last year, the biggest first quarter drop in UK retail sales, excluding food, in nearly six years, although once again this can be attributed to the timing of Easter.

Inflation on the other side of the Atlantic was a slightly different story, against forecasts for no change, data released on Friday when the markets were closed, unexpectedly showed US inflation declined 0.3% in March. Motor vehicles, wireless phones services and apparel were to blame for the decline. Whilst one reading should not be cause for concern, all eyes will be on next month’s report.

This weekend Turkish citizens head to the polls to vote on a referendum which could see the consolidation of power to a centrally executive president rather than the current parliamentary system. On Monday (17 April 2017) China releases gross domestic product figures for the first three months of 2017. On Tuesday the International Monetary Fund releases its World Economic Outlook ahead of its spring meeting with the World Bank commencing on Friday. Other notable data releases throughout the week include US industrial production (Tuesday), Eurozone inflation (Wednesday), UK retail sales, Eurozone and US PMIs (Friday).