Equity markets were initially bolstered by payroll processor ADP which said private US businesses added 263,000 jobs in March. This was more than economists expected and provided more evidence that hiring momentum is accelerating and eased concerns following earlier disappointing sales of cars and light trucks (which could negatively impact US consumer spending and Q1 GDP data).

Conversely, official Labor Department US payroll data released later in the week (Friday 7 April) came in weaker than expected with a 98,000 increase in March – the weakest payroll figures since last May (economists had expected an 180,000 advance). However, the miss was largely ignored as a March winter storm was seen as the cause. The unemployment rate fell to 4.5% from 4.7%, while wage growth slowed to 2.7% from 2.8%. 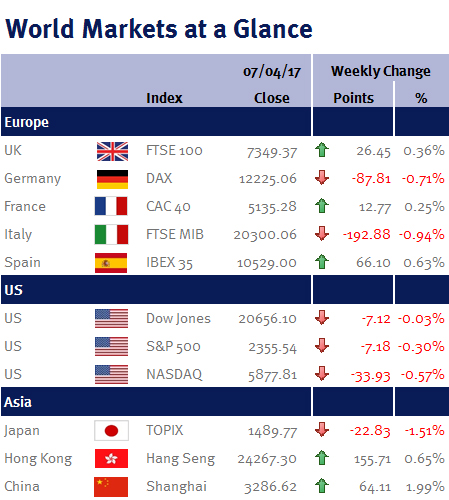 The minutes of the Fed’s monetary policy meeting during March highlighted outline plans to shrink its balance sheet, which has increased to $4.5tn following three post-financial crisis investments in US government bonds (QE). The market reacted well to the news (in contrast with the “taper tantrum” of 2013, when equities fell after Ben Bernanke, the then-Fed Chairman, hinted that the Fed would reduce QE), as it is seen as a substitute for short-term interest rate increases, as the Fed’s portfolio includes $426bn of government securities set to mature in 2018, and a further $352bn that will mature in 2019. Furthermore, the Fed also signalled it wants a gradual runoff in order to avoid any excessive financial tightening.

Unfortunately, Thursday’s (6 April 2017), first face-to-face meeting between Donald Trump and Xi Jinping, the Chinese President, was overshadowed by rising geopolitical tensions following the US missile attack on Syria. However, the meeting did produce an agreement for a 100-day plan to improve trade relations.

Oil prices firmed after the missile attack, with Brent crude ending the week $1.52 higher at $54.24.

This coming week, the UK consumer is back in the spotlight with CPI, unemployment and wage data. From the US we have: PPI, jobless claims, University of Michigan Consumer Sentiment, CPI and retail sales – and after this week’s disappointing auto sales we will be looking for signs of any broadening weakness. We also have the Chinese trade balance on Thursday (13 April).