While cracks have appeared in the so-called ‘Trump Trade’, there are no signs that the economic growth that’s underpinned the recent rally is faltering – for example this week (Tuesday 28 March 2017) we saw US consumer confidence jump to 125.6 from 116.1 in February, its highest reading in just over 16 years. 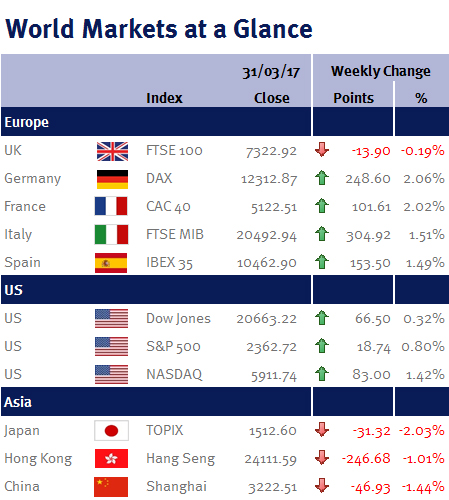 Global markets were also helped by comments from Charles Evans, a Federal Reserve Bank (Fed) policy-maker and Stanley Fischer, the Fed Vice Chairman, who both confirmed that only 2 more interest rate increases this year will be the right amount of tightening for the US economy – the very recent tick-up in US inflation data had raised questions over the potential need for quicker interest-rate increases. The European Central Bank also doused concerns that they were considering withdrawing monetary support after CPI inflation decelerated from 2% in February to 1.5% in March, while the core rate, which excludes volatile food and energy and is seen as a signal of where headline inflation will head, slowed from 0.9% to 0.7%.

On Wednesday (29 March 2017), 9 months after the EU Referendum the UK finally invoked Article 50. Confidence is high that a Brexit deal will be reached by October 2018. However, Theresa May’s 6 page letter to Donald Tusk, the EU President, highlighted the complex and contentious negotiations ahead which will demand considerable horse trading and arm twisting before the UK’s new relationship with the EU can be redefined. Elections in France (May 2017) and Germany (September 2017) could also serve as a distraction and delay the UK’s deal. However, everyone knew this day was coming, and as such the FTSE-100 and the pound were little changed on the day.

It is a busier week ahead for economic data. Highlights include the Japanese Tankan report, eurozone retail sales, Fed minutes and US unemployment. Additionally Donald Trump meets Xi Jinping, the Chinese President, in Palm Beach.