The terrorist attack outside the Palace of Westminster had little impact on financial markets. However, global equities did slip after a US vote on the American Healthcare Act (which was to repeal and replace the Affordable Care Act, aka Obamacare) was delayed and then withdrawn due to lack of support, casting doubt over whether Donald Trump would be able to deliver his pro-growth, business-friendly election promises.

While this has raised questions over the so-called ‘Trump trade’, it is important to keep everything in perspective. As I stated in our Spring Newsletter, the actual impact of Donald Trump’s policies would be very limited in 2017 due to logistics and timing. Furthermore, even if it does have any significant (and negative) impact on the timing of Donald Trump’s economic policies and reforms, that doesn’t suddenly make the global outlook negative. In fact, the economic fundamentals underpinning global equity markets are improving: the global economy is starting to show solid and improving growth, while corporate profitability continues to improve. 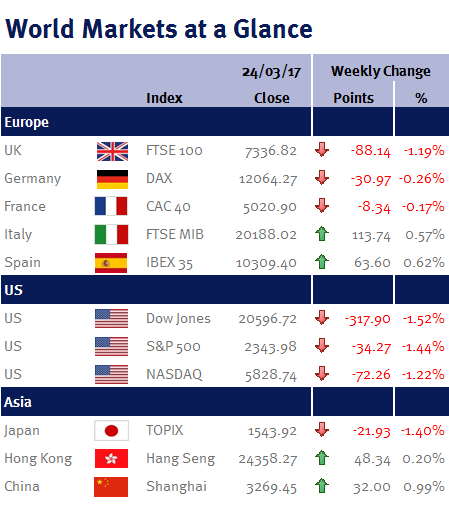 For example, on Friday (24 March 2017) data showed that orders for US durable goods not only increased by more than forecast in February (1.7% versus expectations of 1.4%), January’s increase was revised up from 2% to 2.3%. This is a clear indication that business investment is picking up, with or without Donald Trump’s help.

Additionally, all the eurozone PMIs increased, with the composite rising to 56.7 – its highest level in over five years.

In the UK the Office for National Statistics (ONS) said on Tuesday (21 March 2017) that UK CPI inflation had accelerated from 1.8% to 2.3%, breaching the Bank of England’s (BoE) 2% target for the first time since November 2013, reflecting the impact of sterling’s 16% decline since the Brexit vote on 23 June 2016 on our imported goods, as well as higher fuel prices (the price Brent oil has increased by over 70% in sterling terms over the past 12 months).

Although the minutes from the last BoE Monetary Policy Committee meeting suggested that Kristin Forbes voted for an interest rate increase, I believe the BoE is likely to tolerate inflation overshooting its 2% goal this year, in an effort to provide support to the UK economy which looks increasingly likely to experience a period of Brexit induced economic uncertainty, exacerbated by impending European elections and a squeezed consumer (slowing wage growth and higher inflation means that UK households could soon start seeing real incomes fall – and the consumer spending accounts for about 60% of the UK economy).

Brexit will dominate media headlines this coming week as Theresa May is expected to trigger Article 50 – although it is unlikely to generate any significant financial market reaction. Additionally, we have Japanese and eurozone CPI and Chinese PMIs.