Global equities advanced this week thanks to the US Federal Reserve (Fed) which gave assurances that policy tightening would be gradual and the result of the Dutch elections.

While US CPI inflation continued to pick up in February (to 2.7% from 2.5% in January), core CPI (which excludes food and energy) fell from 2.3% to 2.2%. Both these inflation readings were similar to the Fed’s favoured inflation reading, the Personal Consumption Expenditure (which was last released on 1 March 2017), in that they both show a rising headline number, mainly on the back of the recent increase in oil prices, while the core number effectively moved sideways. 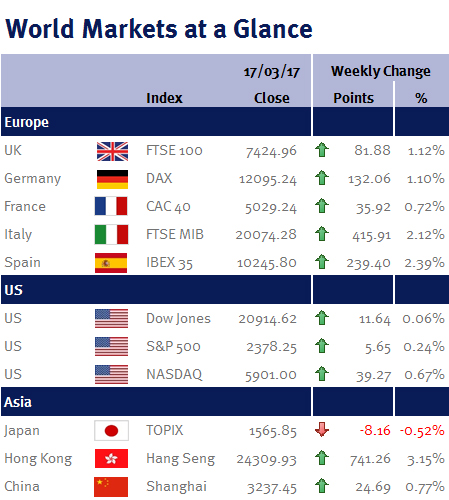 That coupled with recent employment data (which suggests that the US is closing in on ‘full employment’), explains why the Fed raised US interest rates by 25 basis points on Wednesday (15 March 2017) to a band of 0.75-1.00% from 0.50-0.75%, while giving a dovish tone in the accompanying statement – a clear sign that they don’t currently expect to speed up their previously indicated pace of tightening of three increases this year.

Both the Bank of England (BoE) and the Bank of Japan kept interest rates steady this week, while the Dutch public showed that the populist outcome isn’t always guaranteed as the Prime Minster Mark Rutte and his People’s Party for Freedom and Democracy (VVD) fended off Geert Wilders’ anti-Islam, anti-EU Freedom Party (PVV) in Wednesday’s election.

Oil and sterling added a bit of excitement to markets. Brent oil fell below $50 a barrel on Tuesday (14 March 2017) for the first time since 30 November 2016 on news that Saudi Arabia increased production, but then recovered to $52 (on Thursday 16 March 2017) after it was reported that US stockpiles declined. The pound weakened to US$1.21 on news that Theresa May had won permission to trigger Article 50, but then recovered strongly to US$1.24 after it was revealed that Kristin Forbes, one of the BoE Monetary Policy Committee members voted for an interest rate increase, while several other members indicated that that if UK inflation increases further they would also consider voting to increase UK interest rates.

This weekend G20 finance minister meet in Germany, then in the coming week (commencing 20 March 2017) we have the alphabet of economic date. On Tuesday (21 March 2017) we have UK CPI, RPI, PPI, PSNB and CBI Trends. And on Thursday (23 March 2017) we have UK retail sales, US initial jobs claims and eurozone consumer confidence. There is also a number of Fed policy-makers speaking this week, including the Fed Chair, Janet Yellen.