‘Fairly soon’ was the message from the minutes of the last US Federal Reserve (Fed) monetary policy meeting, as policymakers suggested an interest rate increase may be appropriate to avoid the US economy overheating.

However, the ‘fairly soon’ reference was tempered by the fact that the policymakers are confident that interest rates only need to increase gradually as there is currently very little risk that inflation will suddenly accelerate. 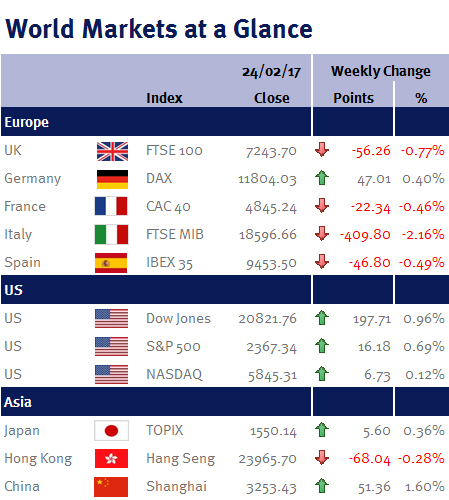 This suggests that the Fed is struggling with uncertainties surrounding Donald Trump’s stimulus plans (the details of which have yet to be announced), coupled with headwinds caused by the recent strength in the US dollar – however, the Fed may get details of Donald Trump’s stimulus plans next week (Tuesday 28 February) when he gives his eagerly awaited first address a joint session of Congress.

While the Dow Jones was busy recording its 11th straight new closing high in anticipation that Donald Trump will cut taxes, ease regulation and announce a major infrastructure spending program, European equities retreated towards the end of the week as politics returned to the fore.

The first round of France’s election takes place on Sunday 23 April and polls currently suggest that Marine Le Pen’s right-wing, anti-euro, National Front party could come out on top. While none of the poll have so far have shown Marine Le Pen even close to a victory in May’s second, and final round (on Sunday 7 May), recent polls have shown that she has narrowed the gap.

Elsewhere polls in Germany suggest that Angela Merkel’s ruling party has fallen behind the Social Democrats (German elections are on Sunday 24 September 2017), while Matteo Renzi resigned as leader of Italy’s Democratic Party.

However, as mentioned above, all attention will this week be focused on Donald Trump’s major congressional address on Tuesday (28 February).