It was another week that was all about Donald Trump: while media headlines concentrated on his immigration ban and its setback in the appeals court, global equities were busy climbing higher after he promised that details of a “phenomenal” tax plan would be announced in the next few weeks. 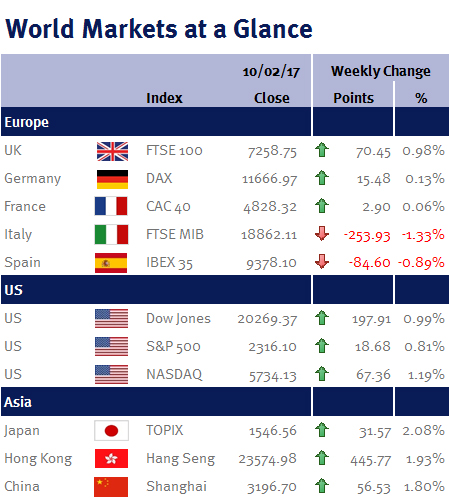 Chinese equities were also helped after trade data indicated overseas shipments had rebounded on stronger global demand coupled with a softening tone from Donald Trump, who spoke with the Chinese president, Xi Jinping, and said that he would not challenge Beijing on its “one China” policy and talked of closer US/Chinese ties. The softer tone eased concerns of an imminent trade war and helped Asian markets move higher.

Elsewhere, the yield on Greece’s 2-year debt rose to 10% due to an impasse between creditors ahead of a deadline to receive further bailout funds, while the UK’s housing white paper revealed very little new.

It is a busy week ahead for economic data. In the UK we have CPI, unemployment and retail sales data. In Europe we have eurozone Q4 GDP and the publication of minutes from the ECB’s last monetary policy meeting. In the US, we have inflation figures for January; while Janet Yellen, the Federal Reserve Bank Chair, spends two days delivering her semi-annual Monetary Policy Report to Congress (listen out for hints on the timing of the next US interest rate increase and comments on the value of the US dollar).

And Donald Trump: he hosts Justin Trudeau, the Canadian Prime Minster and Benjamin Netanyahu, the Israeli Prime Minster – so the media will be watching for an international incident or two, as trade could be an issue after Donald Trump said he plans to renegotiate the North American Free Trade Agreement.