Despite a wobble after Donald Trump’s press conference on Wednesday (as he did not give any timeline for his stated tax cuts or reforms) most global equity markets extended their recent gains this week.

The FTSE-100 ended the week capping a 14th consecutive rise and 12th consecutive record close – the longest record-setting streak in its 33-year history. However, the Dow Jones again failed to breach the 20,000 level.

China’s PPI (producer prices) rose at its fastest pace in just over 5 years thanks to higher input costs (commodities) and a weaker yuan (the Chinese currency). However, history shows that it is simply a matter of time before this results in higher CPI (inflation) in the US, UK and Europe (see below). 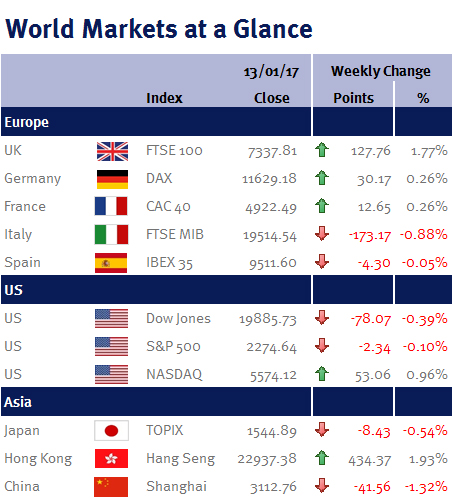 Although Kuwait’s oil minister stated that OPEC has already delivered around 60-70% of its promised supply cuts (some OPEC members were given 6 months to lower output), oil ended the week lower after it was reported that US oil inventories rose, coupled with the fact that the EIA (Energy Information Administration) raised its forecast for US shale production to 9m barrels a day (in December they forecast 8.78m barrels – and in 2016 US shale production was 8.89m barrels a day). As I stated in my weekly note for the week ending 2 December 2016, OPEC’s decision to blink in its fight for market share, will simply encourage new shale supply to come on stream, which will keep the oil price in check.

Looking ahead, the main focus this week will be on Theresa May’s speech outlining her vision for Brexit. Most of her Brexit comments since becoming Prime Minster have suggested that her priority will be on border control and restricting immigration over access to the single market (a hard Brexit) – and her comments could result in a bumpy week for sterling.

Elsewhere, US markets are closed on Monday (16 January) for Martin Luther King Jr. Day; world leaders, economists and bankers attend the World Economic Forum in Davos; and we have UK, US, eurozone CPI data. Furthermore Mark Carney delivers his first speech of the year and may refer to Brexit uncertainty and sterling’s weakness (and its impact on CPI) – providing clues on the future direction of UK interest rates.