Global equity markets moved higher over the week. And this upward move, coupled with renewed sterling weakness, helped to lift the FTSE-100 to its seventh straight record closing high and its ninth consecutive daily advance (sterling weakness helps exporters and multinational companies as over two-thirds of the FTSE-100’s total revenue is derived from abroad). 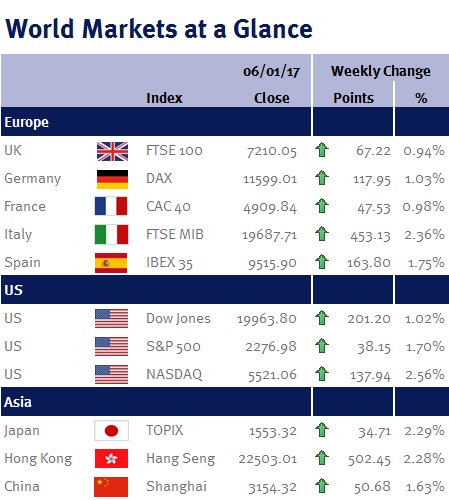 However, investors spent most of their time watching the Dow Jones index which flirted with, but failed to breach, the psychological 20,000 level. The index tantalisingly came within 0.4 points of breaking though the level, before ending the week at 19,963.80, up just over 200 points over the week. After breaking through the 19,000 level for the first time on 22 November 2016, it needed only 14 trading days to reach 19,900 on 13 December 2016. In the 16 trading days since it has been unable to fully add that last 100 points. Consequently, this is the fourth week that I have had to write that the Dow Jones has failed to break through the psychological level of 20,000 – so it would be good to break through it soon, as I can then stop writing about it!

Elsewhere in the US, both the S&P 500 index and the technology-heavy NASDAQ index recorded new record closing highs, helped by robust US employment data which showed that non-farm payrolls climbed by 156,000 jobs last month. Whilst it was slightly below expectations, November’s employment data was revised upwards. However, most attention of the data release was given to the acceleration in hourly earnings from 2.5% to 2.9% – the largest gain since 2009.

China’s yuan strengthened on Friday on speculation that Chinese authorities were preparing contingency plans to support their currency and curb capital outflows.