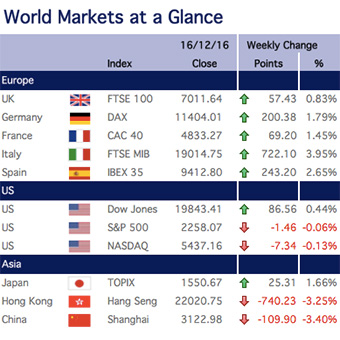 While the move was widely anticipated given recent comments from a number of Fed officials, coupled with the strengthening US employment market, it was clearly the case of the old saying “buy the rumour, sell the news”, as US markets continued their recent strong run ahead of the announcement by registering another record high on Tuesday 13 December, only to retreat afterwards.

The Fed’s accompanying statement suggested that the pace of tightening was likely to accelerate, with three increases in 2017, up from 2 indicated previously.

However, one should remember that this increase was only the second in this current expansion and that it has been a full year since the last increase, when the Fed indicated that there would be four increases in 2016.

As a result of the retreat, the Dow Jones failed to break through the psychological level of 20,000 – having been within 34 points of it during trading on Wednesday. However, to put this in context, the Dow Jones only broke through 19,000 for the first time on Tuesday 22 November – just 3½ weeks ago!

Elsewhere, the Bank of England left UK interest rates unchanged at 0.25% during their rate-setting meeting. While the committee acknowledged that the UK economy had performed much better than expected since the EU Referendum on 23 June, they reiterated that growth in 2017 was likely to slow.