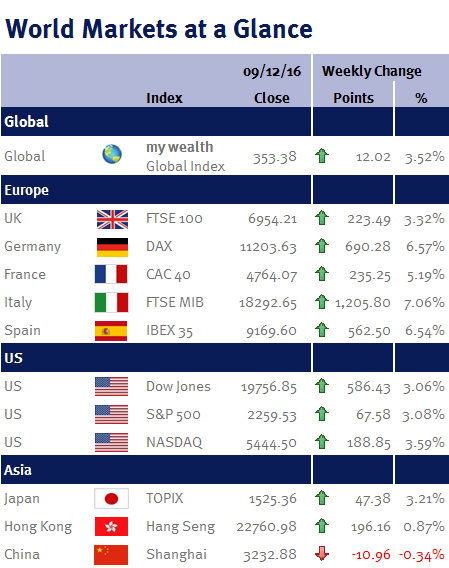 Global equity markets ended the week firmly higher, with the main US indices registering new record highs on continued hopes that Donald Trump’s Presidential election win will usher in a period of prosperity as a result of pro-economic growth policies, including tax cuts, increased defence spending and deregulation.

European markets brushed aside news that the Italian Prime Minister, Matteo Renzi, was resigning after losing the referendum that would have allowed him to push through constitutional changes as a ‘No’ vote (and his resignation) was already priced into the market. European equity markets were subsequently helped by the European Central Bank’s (ECB) decision to extend its QE program by 9 months to the end of 2017.

Although the ECB’s monthly asset purchases (QE) will be reduced from €80bn to €60bn, Mario Draghi, the ECB President, signalled he would add to stimulus if the eurozone economy didn’t improve (while the economy has been showing signs of improvement in recent months, German industrial production disappointed by rising less than forecast in October, while euro-area inflation at 0.6% hasn’t been anywhere near the ECB’s 2% target since January 2013).