Most global equity markets (with the exception of Italy) ended the week lower ahead of this Sunday’s (4 December) Italian constitutional referendum.  The Italian Prime Minister, Matteo Renzi, has said that he will resign if the public vote ‘No’, which polls currently suggest will happen. 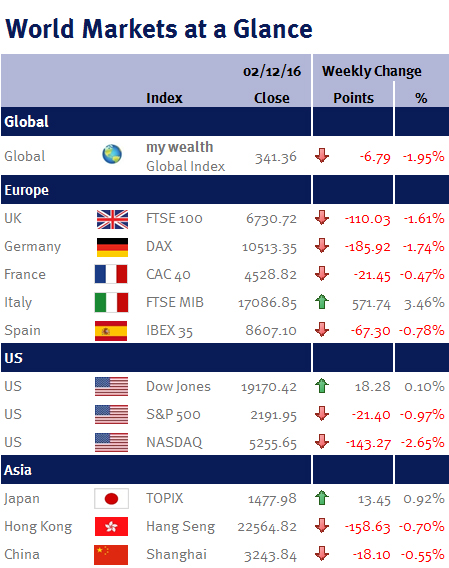 Oil traded above $53 for the first time in over a year after OPEC (Organization of the Petroleum Exporting Countries) agreed to reduce output by 1.2 million barrels a day to 32.5 million and Russia pledged to cut output by 300,000.  While these cuts could theoretically result in a supply/demand balance during 2017, it does require the cartel to be hard in the policing of its output, as historically compliance with past accords has been poor (according to Bloomberg the last time OPEC had a collective quota, members exceeded it for 20 of the 24 months it was in place).  Furthermore, by abandoning its market share strategy in order to try and increase the oil price, OPEC has simply encouraged the shale producers to boost production and restart exploration, which may keep the oil price in check!

In the US, the Federal Reserve’s (Fed) ‘Beige Book’ (a summary of information and commentary on regional economic conditions), suggested that the US economy continued to expand across most of the country, with seven of the central bank’s 12 districts reporting moderate or modest growth over the period October to Mid-November – although some districts reported some uncertainty in the wake of the Presidential election.  The Fed also said that while there was little inflationary pressure, there was tightness in the labour market, with a shortage of workers in a number of districts including Cleveland and San Francisco.

The Beige Book coupled with this week’s US payroll data bakes-in an increase in US interest rates at the next Fed monetary policy meeting on 13-14 December.  However, while the odds that the Fed will increase interest rates by 25 basis points (to a range of 0.50%-0.75% from a range of 0.25%-0.50%) are fully factored into equity prices, the outlook for further increases in 2017 is in doubt after US wages unexpectedly declined.  The US economy added 178,000 non farm jobs in November, pushing the unemployment rate down to 4.6%, while hourly wages declined by 0.1% (economists had expected earnings to rise 0.2%).