The broader global equity markets ended the week on a high, fuelling further expectation that a Trump presidency could indeed prove positive for Global markets. We have already begun to see signs of the US President-elect softening his stance on many of his campaign trail claims, such as Obamacare (the US healthcare system), accepting that he would not be scrapping the provision all together as initially anticipated. 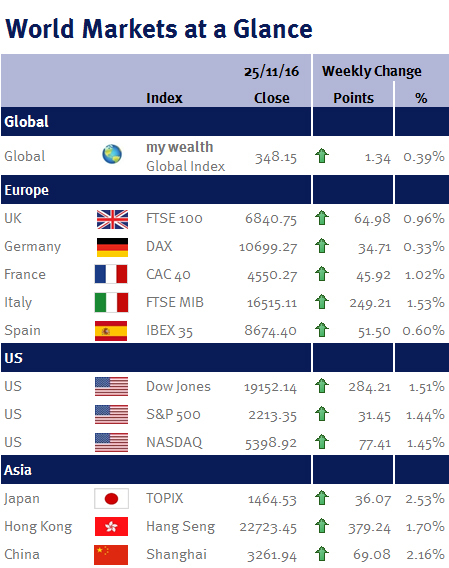 Discussions with Japanese Prime Minister Abe also seemed to go well, however, Mr Trump’s announcement to back out of the anticipated Trans-Pacific Trade partnership (a new major multinational trade pact) could prove to be an unknown stumbling block for countries such as Japan, Australia and Mexico.

Last week saw the UK Chancellor Phillip Hammond announce the Autumn Statement, one which sparked little controversy in terms of policy introduction. The statement, for global stock markets at least, was uneventful. A similar market impact was echoed by the US Federal Reserve Bank when they released the minutes of their last meeting, giving little more by way of clarity or guidance on a potential interest rate rise.

In other regions we saw a stronger than expected set of consumer confidence data coming from Europe, which in the wake of the UK ‘Brexit’ referendum suggests consumers are not fazed by the prospect of life ‘without’ the UK. This is supported by the strong PMI (purchasing manager index) data, a measure which gauges the health of the manufacturing sector.

Outside of the regions, broader expectation of a deal between the major oil producing nations pushed oil prices higher on Monday (Brent Crude closing at $48.9 per barrel, from the previous close of $46.86). Failure to reach an agreement caused a pull back in oil, still ending the week higher at $47.24 per barrel ahead of this week’s meeting of OPEC, the Organisation of Petroleum Exporting Countries.