It was an interesting week: the surprise victory for Donald Trump in the US Presidential election initially sent markets lower. However, markets quickly recovered given the prospect that Donald Trump’s fiscal stimulus and pro-growth policies would help the world’s largest economy. 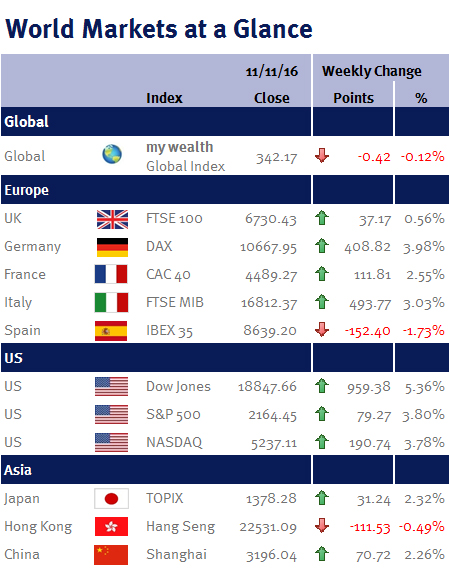 As a result the US Dow Jones index not only recorded its biggest weekly gain since December 2011, but it also set a new all-time record high.

During the election campaign Donald Trump talked about lowering taxes, easing corporate regulation and pledged to at least double the $275bn infrastructure investment of his Democratic rival Hilary Clinton.

Consequently, financial and cyclical stocks were among the best performers, while pharmaceutical stocks also rallied on relief that Hilary Clinton’s plans to restrict drug prices had been scuppered.

However, given Donald Trump’s ambitious plans will require more government debt, US Treasuries fell and yields rose, especially at the longer end, as inflation expectations also increased.  For example, the benchmark 30-year Treasury rose 37 basis points over the week to yield 2.94%.

Interestingly the pound was one of the few currencies to strengthen against the US dollar and this hit the UK’s exporters (which had previously benefited from the weaker pound) and held the FTSE 100 back to a gain of just 37.17 points.

Elsewhere oil fell to its lowest level since early August after it became obvious that OPEC (Organisation of Petroleum Exporting Countries) would be unable to support the oil price by limiting output:  Iran and Iraq both said they increased output last month, while Saudi Arabia pumped at near record levels.