Third-quarter US economic growth was the fastest in two years, growing at an annualised rate of 2.9%, up from a 1.4% gain during the second-quarter and well ahead of the expected 2.6% growth. 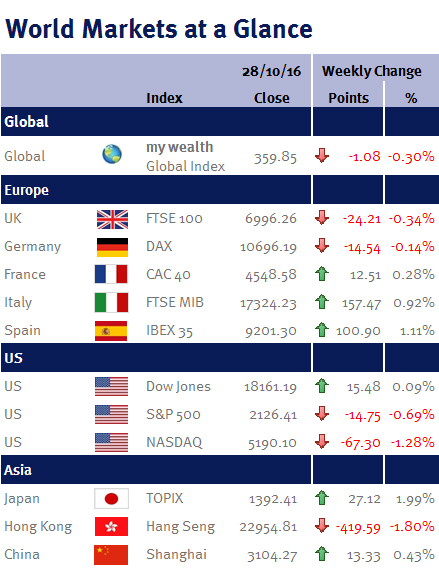 Although the Federal Reserve (the US central bank) claims that every meeting is “live” for an interest rate move as the decision is data dependent and isn’t politically motivated, their next meeting takes place on 1-2 November, less than a week before the US Presidential election on 8 November – so while the odds of an increase at next week’s meeting is slim, an increase at their following meeting on 13-14 December is looking more likely.

Meanwhile the UK economy expanded by 0.5% during the third-quarter.  Although this was slightly slower than the 0.7% GDP growth recorded in the second-quarter, it beat expectations of 0.3% and defied most of the pre-Brexit vote predictions.  For example, the Treasury forecast that the UK economy would contract by between 0.1% and 1% during the quarter if the UK voted to “Leave” – although in their defence, it assumed that Article 50 would be triggered immediately and didn’t take into account the subsequent and extensive stimulus measures from the Bank of England (BoE).

The GDP announcement coupled with the news that Nissan would build two new car models in Sunderland and AXA’s property division would proceed with its plan to build London’s tallest skyscraper helped the pound to rally as it suggests Brexit has, so far, had little effect and makes it less likely that the BoE will provide further stimulus in the short-term.

However, this proved short-lived and sterling ended the week 1.21% weaker against the euro and 0.62% weaker against the US dollar, while the benchmark 10-year gilt yield increased just over 17 basis points to yield 1.258% – its highest level since the Brexit vote as reports from GfK, YouGov and Asda all cited weaker consumer confidence and household spending power (the consumer accounts for around 60% of the UK economy) as rising inflation is already starting to squeeze household finances.