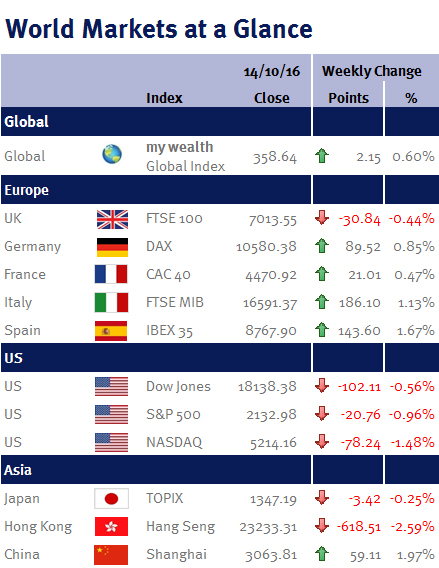 The index was initially helped by the continued weakness of sterling – as the FTSE-100 is largely made up of multinational companies, a weaker pound gives an immediate translation gain to those companies with significant overseas earnings.

However, most global markets weakened during the second half of the week following the release of US Federal Reserve (Fed) minutes and Chinese economic data.

Minutes from the last Fed meeting on 20-21 September indicated that while several Fed officials thought third-quarter US GDP growth and employment market gains were balanced by continued below target inflation it may be appropriate to raise rates “relatively soon” and that it was a “close call” whether or not to increase at the September meeting.

However, Janet Yellen, the Fed’s Chair, muddied the picture on Friday by suggesting that running the US economy hot could boost economic growth and labour force participation.