The pound had a bad week. It began by falling to its weakest level versus the euro since 2011 and a 31 year low versus the US dollar of around $1.27, before becoming the latest victim of a flash crash, falling to $1.1752. 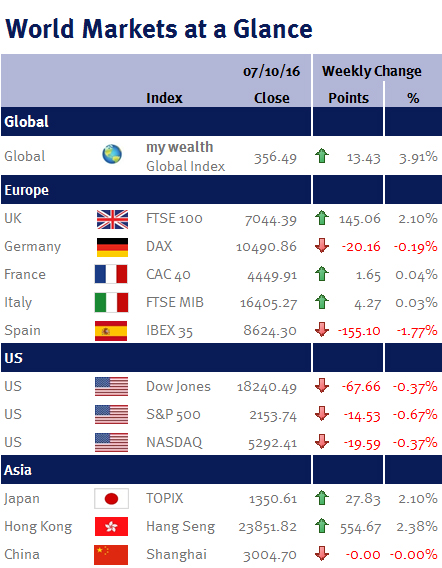 Early weakness was caused by comments made at the Conservative’s annual party conference in Birmingham, suggesting that the government would prioritise controlling immigration at the expense of keeping access to the single market – a so-called ‘hard Brexit’.

Then in a chaotic two minutes of trading in Asia on Friday morning (just after midnight for us), the pound suddenly fell nearly 7%.

Whilst the catalyst isn’t actually known and could simply have a been a trader’s “fat finger” (i.e. a misplaced keystroke) or computer initiated algorithmic trading, it coincided with comments from Francois Hollande, the French President, that EU officials should take a tough negotiating stance with the UK – implying that both sides were currently accepting of a hard Brexit.

While the drop was short-lived (the pound quickly recovered most of the flash crash losses during the following hour), it still ended the week 3.93% lower at $1.246.

As the constituents of the FTSE-100 are mostly made up of multinational companies such as Oil & Gas Producers, Miners and Pharmaceuticals, over two-thirds of the FTSE-100’s total revenue is derived from abroad, so a weaker pound provides both a boost to exporters and an immediate translation gain for those companies with significant overseas earnings.