Global equities fell this week as tit-for-tat rhetoric towards an all-out trade war escalated after Donald Trump told the US Trade Representative to identify another US$200b worth of Chinese goods for tariffs. 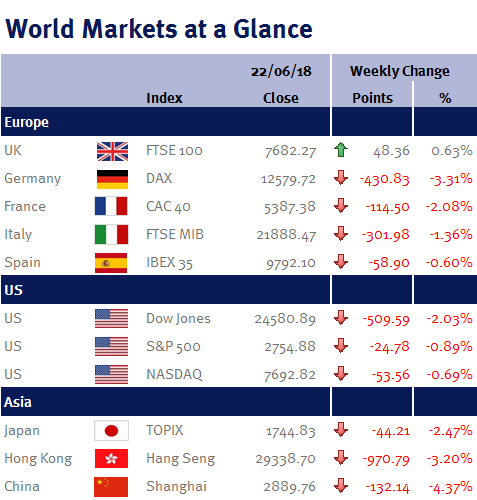 I still believe that Donald Trump’s tariff threats against China is part of his negotiating tactics aimed at achieving trade concessions (and he probably views his posturing as beneficial as we approach US mid-term elections in November).

Consequently, I believe he will step back from an all-out trade war with China as it is ultimately not in anybody’s interests. And we know from this week’s decision to end migrant family separation that Donald Trump is capable of backing down, especially if confidence and sentiment in US equity markets starts to suffer – as he has on several occasions tied his Presidency to the stock market performance.

Yesterday (Thursday 21 June 2018), as expected, the BoE left UK interest rates unchanged at 0.5%. However, what was unexpected was the change in the voting: the BoE’s chief economist, Andy Haldane, voted for an immediate increase in interest rates, making the voting split 6-3.

While this potentially makes an interest rate increase this year much more likely, please don’t get carried away: the market has been hurt several times over the past few years by the BoE’s flip-flopping.

Additionally, strictly speaking, with UK CPI inflation starting to converge with the BoE’s 2% target, there is actually no need to raise interest rates. And this coupled with anemic real wage growth; a weak housing market; Brexit uncertainty (despite the fact that tomorrow marks two years since the EU Referendum); and talk of trade wars, makes any increase in UK interest rates nonsensical to me.

Interestingly, BoE policymakers stated that recent economic data had been in line with their predictions that the UK economy would quickly bounce back from the slowdown we saw in Q1 (which they believe was temporary due to bad weather). I am not sure what economic data I have missed, but I would have said that with the exception of the pick-up in retail sales (which I believe was only due to the fantastic weather we had over the two May bank-holidays coupled with the Royal wedding), most economic data out of the UK has been on the disappointing side.

It is a quiet week ahead as the big data releases of the month are mostly out of the way, although we do have US PCE (the Fed’s preferred inflation gauge); the final Q1 GDP readings from the US and the UK; and eurozone and Japanese CPI.

However, this weekend Turkey goes to the polls. And given President Erdogan aims to tighten his grip on monetary policy, we could potentially see more volatility in the Turkish lira on Monday morning (25 June 2018).